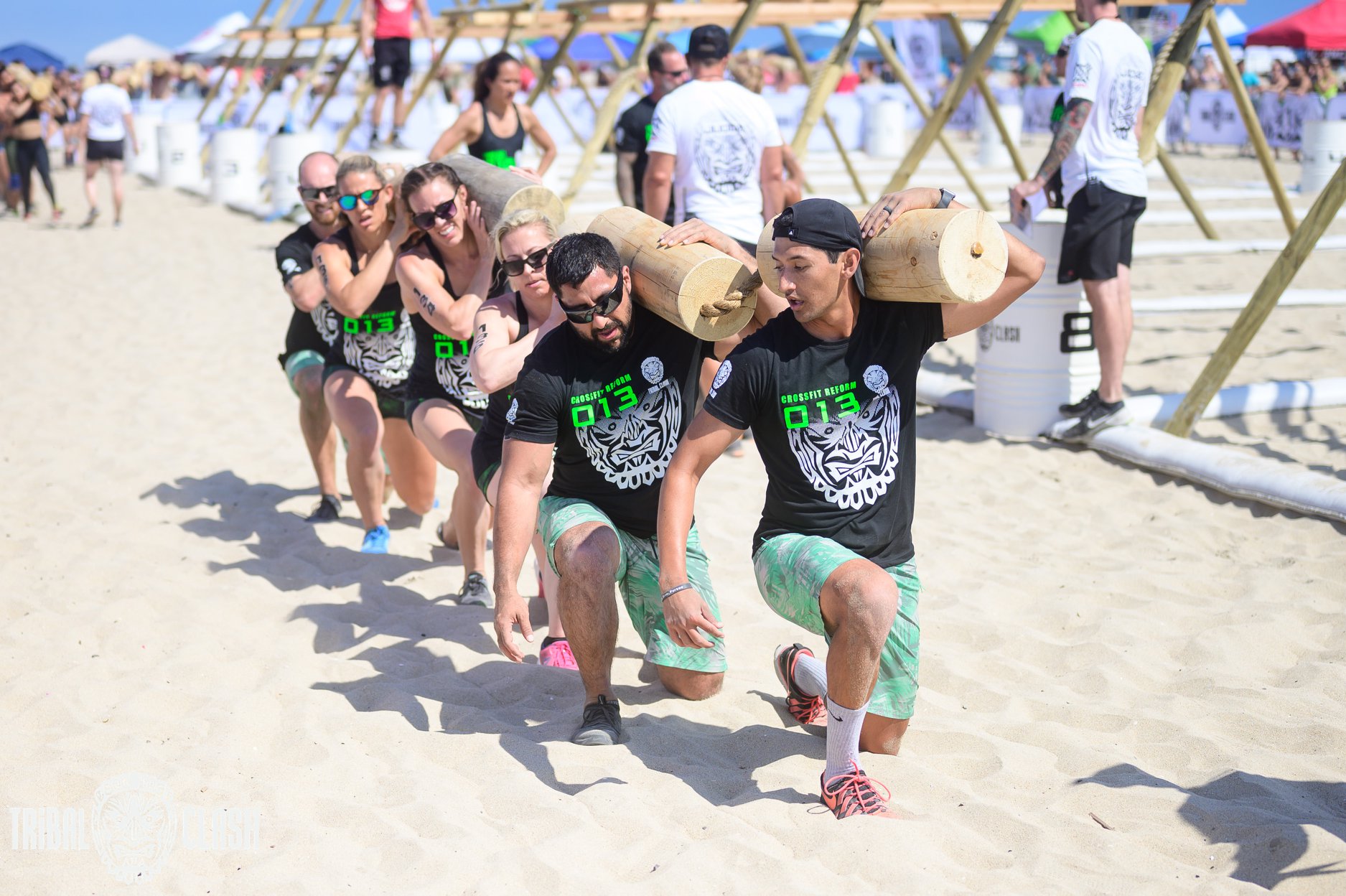 The team starts with chest to sand behind the baseline. Behind the baseline they have one truck tyre and five (5) sandbags weighing 130lb. On the lane they have two up and over beams. The task is to transport the sandbags and the tyre,  plus the athletes, over the beam to the opposite end of the lane and back as many times as possible in 12 minutes. The athletes, tyre and sandbags must go over the beams. The athletes can be assisted. Once the truck tyre has been lifted off the floor, it must not touch the ground between the two base lines. The team can have any number of athletes carrying the objects. All objects must be carried and not dragged.  Any infringement will equal a 10 second time penalty.  The team scores one rep per object + athlete behind the baseline. The tyre must be on the floor first and the sand bags on top for the reps to count. Once all the sandbags are inside the tyre, all six athletes are over the baseline with hands in the air, the team can start to move the objects back to the opposite end. Score: total reps.

The team splits into three pairs. On GO the first pair flips the tyre down the lane to the marker. At the marker the pair completes 10 burpee tyre jump throughs. The burpees have to be completed two at a time, two footed take off and landing. The pair can split the burpees between them. After 10 burpee jump throughs, the pair runs to the sea, turns to face the crowd, and holding hands completes a sea submerge. Once they get a thumbs up from the judge, they can return to the tyre, where they complete another 10 burpee jump throughs, and flip the tyre to the far end of the lane. The pair then runs back to the baseline and tags the next pair. Once all three pairs have gone, the team completes as many shoulder to overhead reps with the tyre in remaining time, three athletes working at a time. The trio can swap any number of athletes on the tyre, but the tyre must go back to the ground at every change. Each STOH rep must have full lockout, short athletes can lose contact of the tyre at the top of the tyre, taller athletes can have a wide stance.

On GO the team completes 18 ground to overhead reps with the sandworm. The worm weighs approximately 330lb. The rep is counted when the worm is on the opposite shoulder, and all six athletes are standing with hips and knees locked out. The worm must be dropped to shoulder from overhead first before dropping to the ground. After 18 worm GTOH reps, the team completes 6 rope climbs. The athletes can go in any order, not everyone must complete a rope climb. The rope climb rep is counted with a full palm contact on the top beam. The athlete must show control on the descent. The non-climbing members must remain outside of the rig. The sandworm must be held on shoulders during rope climbs for the rope climb reps to count.