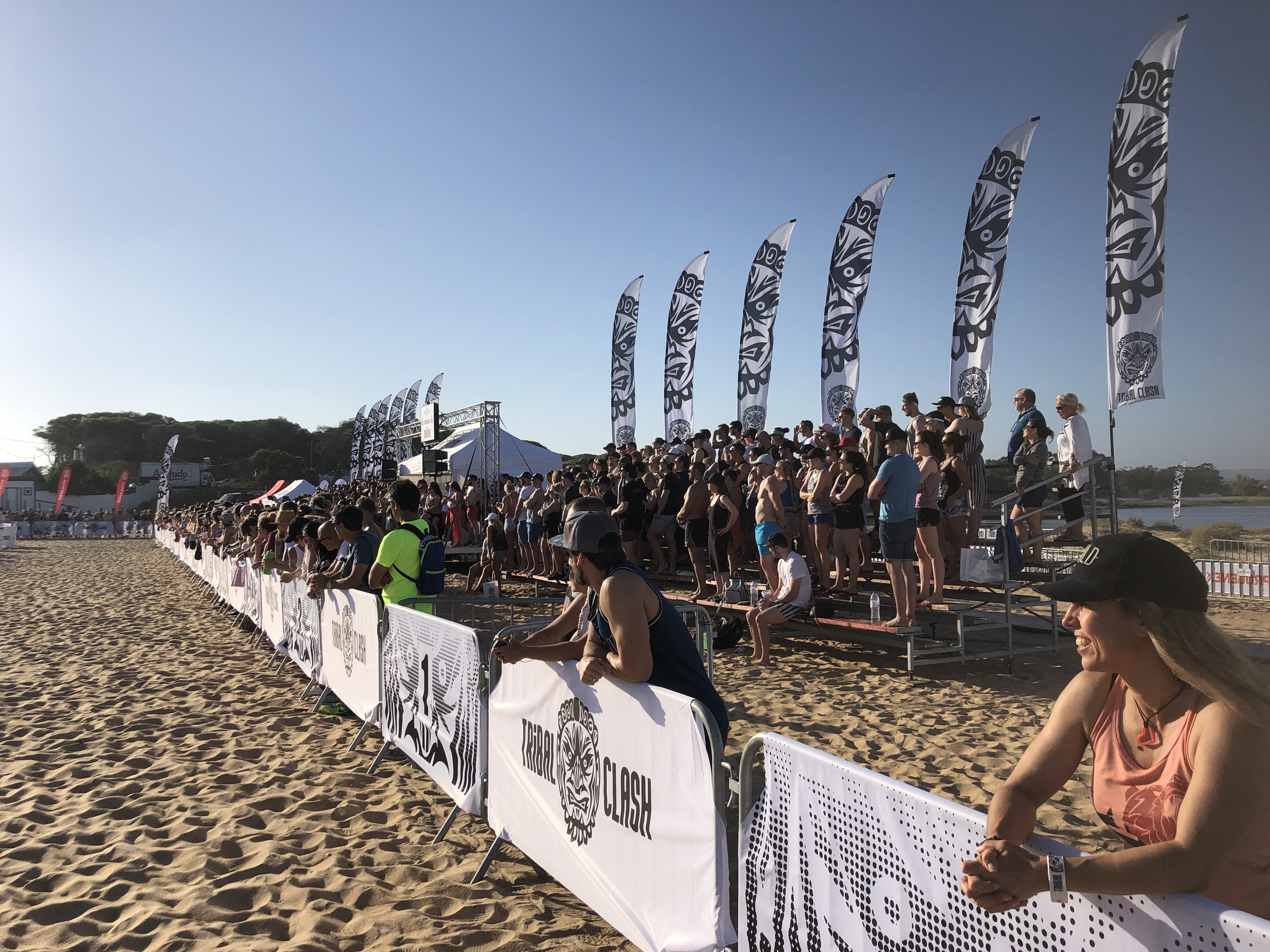 The team starts lying prone behind the baseline, hands on sandbags. On GO the team completes 25 squats with the log worm. The worm must be in Zercher hold for reps to count. The elbows or logs must not touch the knees at any time. All athletes must have hip crease below parallel at the same time at the bottom of the rep and stand with hips fully extended at the top of the rep. The athletes must stand in a line facing the forest.

After 25 squats, 3 athletes complete 10 synchro burpees over worm, 2 athletes starting on one side of the worm and 1 athlete on the other side, all three facing out. Athletes’ chests and thighs must be on the floor at the bottom of the burpee, and the rep must have a two-footed take-off and landing.  The athletes must have chest to floor at the same time but they do not have to jump at the same time. Remaining three athletes must be lying on the floor behind the baseline, hands on sandbags for the burpee reps to count. The three athletes starting the burpees must complete all 10. After 10 burpees, all athletes return to the log and repeat the log squats. The teams continue 25 squats, 10 burpees as many rounds as possible for 12 minutes.

At 12 minutes, the team exits down the ocean side of the arena. They proceed straight into:

At Event 1 time cap, the team exits straight down the lane to the shoreline. The teams will have 3 minutes between the end of Event 1 and the start of Event 2.

On GO the teams pick up a rescue board. All six athletes must have hands on the board before the team can start. The team completes a swim in the sea around a marked course. All athletes must stay in contact with the board at all time. The team can have one athlete on the board.  When the team has completed their swim, they return the board back to its starting position and head out through the green start flags and onto a beach run – the route will be market by flags. Shoes must be worn on the run. Each individual athlete’s time will be logged at the run finish gate. The team’s score for Event 2 is the combined finishing times for all six athletes, including the rescue board swim. You must ensure your athlete tattoos are visible for this event – without a race number, you will not receive a score.

The team is split into three M/F pairs, the pairs work in 2 minute intervals.

The team starts lying prone behind the baseline, hands on sandbags. On GO the first pair proceeds to the atlas stones. There is one stone for males (66kg) and one stone for females (42kg). The pair then starts to accumulate as many atlas stone lifts to shoulder as possible within the two minutes, one athlete working at a time. The working athlete must show full extension when the atlas stone is at the shoulder. The stone must be dropped in front, and the athlete must fully let go of the stone between each rep, they cannot touch and go. The other athlete may not touch their atlas stone until their partner’s stone is back on the floor.  Once the 2-minute interval is over, the first pair exits the lane and tags the next pair. Each pair will go twice. The team must stick to the same M/F pairs throughout the workout. If an athlete or an atlas stone touches a sandbag, it’s a no rep. The athletes are lifting both facing the forest.

The team starts lying prone inside the lane facing inwards. On GO the first athlete jumps up, turns round and sprints down the lane, turns right, and continues around the arena until he is back in the lane. Once he is back in the starting position, the next athlete runs the same course. The sprint portion is over when all 6 athletes are back lying on the sand in the same position they started in. When the 6th athlete is back, they then have to pop up and get down facing OUT. The time for Event 4 is logged at this point.

The team then begins Event 5 immediately, where they start by working in three pairs. The first pair gets up and starts their wheelbarrow walk relay – the athlete whose feet are being carried must start with their hands on the sandbag, full extension, reverse out, perform a 180 degree turn and walk to the end of the lane. Feet must be carried with hands on ankles. The athlete must not touch the floor with any other body part except hands until they reach the opposite baseline. If any part of their body touches the ground, that athlete has to do that leg again. The athlete walks four lengths of their lane (up and back twice) then once they are back in their starting position, the next pair goes. The pairs don’t have to be M/F, can be any combination. Second time round the pairs swap .When all six athletes have completed a wheelbarrow walk (4 lengths of the lane), they move to the log worm.

The team picks up the worm, walks it out of the lane into the perimeter, making sure that the toes of the first athlete are behind the marker. The team lunges the worm around the arena until they are back in their lane. The time for Event 5 is logged when the worm is back in its starting position. If the team does not finish within the time cap, they score a rep for each 4 metre mark around the arena, when the toes of the last person on the worm passes the marker. At time out, their score is total lunge reps.

The team gets an immediate 10 second penalty for any shuffle steps, or if the team touches a barrel or another team. During this 10 second penalty the team can put the worm down to the floor, or stand up holding the worm on shoulders. If there is a collision, the team coming from behind will be deemed to be at fault. The team must show control of the worm, any uncontrolled dumping on the worm will incur a 10 second penalty.

This event will take place in the lake, starting in the Red Paddle Arena.

Teams will start in their lane, stood beside their paddle board. On GO the team will pick up the paddle board and enter the water. Teams will paddle a marked course around buoys. At half way point in the course there is a cut-off point. If a team does not make the cut-off point by 7 1/2 minutes, they exit the course and head to Finish. They will place on the leaderboard for this event below the teams that completed the full course.

At the marker before the Finish flags, all paddles must be placed on the board before exiting the water. The time is logged when the board and all six athletes are back in the start pens.

Each lane has 2 x 60kg sandbags and 2 short sandworms. The team starts lying prone inside the lane facing the baseline, hands on sandbags. On GO the team starts transporting the objects from the end of the lane to the centre zone.

As soon as the first athlete is over the beam on the return leg, he can start moving the bags to the baseline. At baseline, 10 reps is scored when all 4 bags and 6 athletes are over the baseline.  The bags have to be fully clear of the baseline for rep to count.

Objects must be lifted and carried, not dragged. If the judge sees a line on the sand, a 10 second penalty is issued. The objects can touch the floor between the baseline and the centre zone but they cannot be dragged. Press is fine, swing and throw is not. A penalty for infringement is 10 seconds when the team has to freeze and stop moving for 10 seconds.